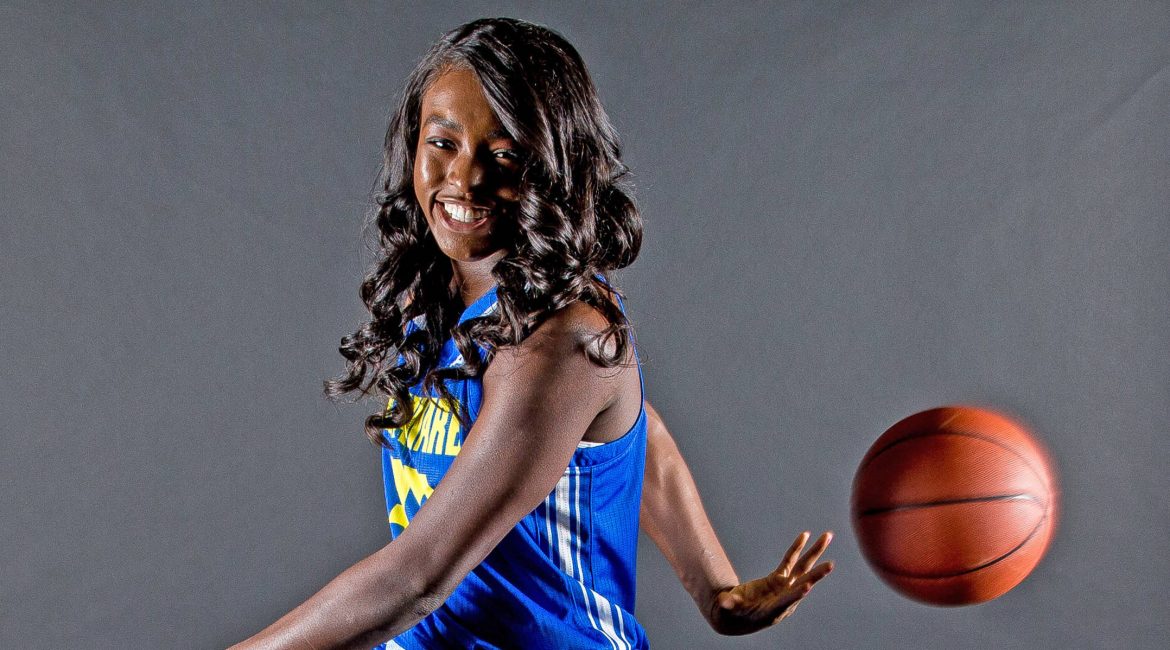 Nigeria has lots of potentials home and abroad, and are easy and difficult to find at the same time.

This time around, one of our correspondents got in contact with 21-year-old Nicole Ehizele Enabosi, who currently majors in Business Management and plays Forward for the University of Delaware Women’s Basketball Team (The Blue Hens).

Nicole has a long list of achievements, but just to mention a few; in 2016-2017 season she averaged double-double, reached 1000 points, earned First Team and All-defensive team player.

Speaking earlier with her mom -Ms. Orafiri Enabosi- she expressed her excitement over her daughter’s level of play and improvement on and off the court; her contribution to her team, and especially her had work academically.

“I have always wanted my daughter to excel in all her endeavors and be a well-rounded, well-grounded individual. She has always been good at Math so it was no surprise she choose Business Management as a Major in school”

When asked how she would feel if Nicole was invited into the Nigerian national team camp in preparation for the FIBA Women’s World Cup in Spain, she had this to say:

“I would be honored and excited if my daughter was given the opportunity to represent our homeland. It would be a wonderful experience.”

Ms. Orafiri expects a lot from Nicole to thrive greatly in the future and in all spheres of life.

Moving on to Nicole, we took a blast to the past to figure out how this journey so far came about.

“Looking at how it all started, it was funny, but when I was little, I was an active cheerleader. My mom ‘forced’ me into the game of basketball, after being convinced by AAU coach Milton Kimbrough”

“Mr. Kimbrough had seen Nicole at a Cheer competition and asked; ‘Why is this tall kid doing cheerleading?’ and that changed everything” she chuckled.
He approached her mom and the rest is history

“Mom supported me all through, pushing me to be a better person, not giving up; she’s my number one role model”

Turns out that Nicole is an extremist who loves adventure, travelling, strolling across a desert, swimming, ice skating, skydiving and hanging out with friends and family. She was also active in volleyball and track and field in High School.

As a Nigerian, Nicole has a large appetite for Okro soup and pounded yam.

Pittsburgh Steelers at the NFL is her favorite team.

Nicole is appreciative of her life’s experience in the game and how it affected positively, becoming a better citizen:

“Basketball has taught me greatly about leadership, team play, working towards a common goal, and discipline. These qualities, characteristics and more have made me a better person, especially off the court.”

Her response on being asked if she was opportuned to play for the senior women’s national team was apt;

“I’ll be very excited, humbled and honored if called upon to the Nigerian National team camp come June.”

Nicole also looks ahead to step up her game overall:

“Working towards improving my IQ in the game, jump shots, footwork, team play amongst others”

Finally, when asked to choose between ‘education’ and ‘basketball’; without hesitation, she chose the former.

“Basketball ends naturally. But with education one can be in her sixties and still make a living while sharing knowledge”